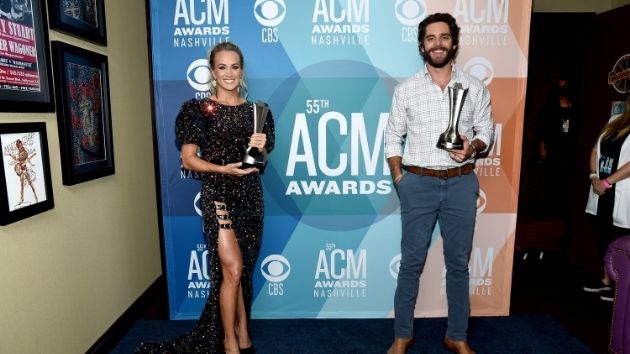 John Shearer/ACMA2020/Getty Images for ACMThe 55th Academy of Country Music Awards — postponed from April due to the COVID-19 pandemic — took place on Wednesday on CBS, from three Nashville locations: The Ryman Auditorium, The Bluebird Cafe and the Grand Ole Opry House, and it was a night of many firsts.

The night’s big prize, Entertainer of the Year, was a tie between Carrie Underwood and Thomas Rhett — the first time that’s happened in ACM Awards’ history.

“Man, 2020,” Carrie said in disbelief.  Rhett meanwhile, did his best to thank the many people responsible, in just “127 seconds.”

Following Miranda Lambert‘s performance of “Bluebird” at the Bluebird Cafe, host Keith Urban revealed that Lambert took home the trophy for Vocal Event of the Year for “Fooled Around and Fell in Love,” her remake of the Elvin Bishop hit on which she traded leads with Caylee Hammack, Elle King, Ashley McBryde, Maren Morris and Tenille Townes.  The win gave Miranda her 35th ACM Award — more than anyone else in the show’s history.

Other big winners included Luke Combs, who grabbed Male Vocalist and Album of the Year honors for What You See Is What You Get.  Old Dominion were also double winners, walking off with Duo of the Year and Song of the Year for “One Man Band.”

The award for Single of the Year went to Blake Shelton for “God’s Country.”  During his speech, Blake thanked his girlfriend Gwen Stefani for “continuing to encourage me to keep doing this and keep trying and being my inspiration.” Earlier, the couple performed their duet, “Happy Anywhere.”

Mickey Guyton, who performed “What Are You Gonna Tell Her?” backed by Urban on piano, added to the historic evening by becoming the first Black female artist in ACM history to be given a solo performance slot.

Urban returned one more time — this time on tape — for a socially distanced performance of “One Too Many,” with Pink, the new duet from his album, The Speed of Now Part 1, coming out this Friday.

Underwood honored country’s legendary ladies, with a medley of Patsy Cline‘s “Crazy,” Loretta Lynn‘s “You Ain’t Woman Enough (To Take My Man),” Barbara Mandrell‘s “I Was Country When Country Wasn’t Cool,” Dolly Parton‘s “Why’d You Come in Here Lookin’ Like That,” Reba McEntire‘s “The Night the Lights Went Out in Georgia” and Martina McBride‘s “A Broken Wing”

Trisha Yearwood honored the artists we lost over the past year with rendition of “I’ll Carry You Home,” from her album Every Girl.

The evening also had some somber moments, beginning with Urban sending thoughts and prayers to people out west battling horrific wildfires, and others on the Gulf Coast threatened by hurricanes.

He also took a moment to address the COVID-19 pandemic and social injustice, noting, “Far too many lives have been lost to both.”

Added Keith, “The example set by our essential workers, our first responders, along with the voices crying out for equality in all walks of life, have echoed around the world and right here in our country.  They inspire us to come together and work together to address these challenges.”

Urban gave a shout out later in the show to singer-songwriter Blanco Brown, who is recovering from injuries he suffered in a car accident.