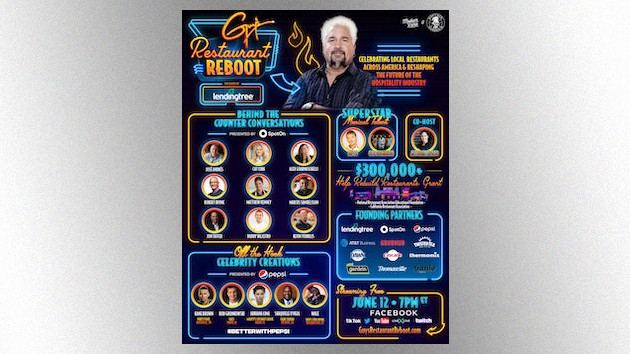 This weekend, Kane Brown will briefly trade in his microphone for a chef’s apron as he participates in Guy Fieri’s Restaurant Reboot, a primetime special aimed at empowering and supporting restaurant owners.

Kane’s among the superstar guests offering up their own culinary concoction, as part of the event’s Off the Hook Celebrity Creations series, a partnership with Pepsi.

The singer’s tipping his hat to his Music City stomping grounds, teaming with local restaurant Party Fowl, which specializes in Nashville hot chicken. Kane’s menu item will be revealed this Saturday, and fans can order it beginning that same day.

Guy’s Restaurant Reboot will air on Saturday on Fieri’s Facebook page beginning at 7 p.m. ET. The event benefits the restaurant industry and will feature over $300,000 in grants to be awarded to different businesses over the course of the special.

Aside from Kane, stars like NBA legend Shaquille O’Neal and supermodel Victoria Lima will also help craft menu items as part of the Off the Hook Celebrity Creations segment. The event will also feature discussions with celebrity chefs and culinary icons, as well as performances, including one from Old Dominion.