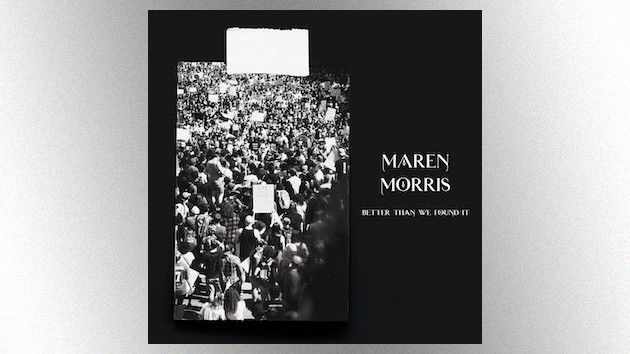 Columbia NashvilleMaren Morris spotlights real-life stories, struggles and tragedies in “Better Than We Found Out,” a new song that she debuted this week.

“When lines of tomorrow are drawn, can I live with the side that I chose to be on? Will we sit on our hands, do nothing about it?” she sings in the chorus. “Or will we leave this world better than we found it?”

The song’s music video, directed by Gabrielle Woodland, tells the stories of people from Maren’s Nashville community: We meet the family of Daniel Hambrick, a black man who was murdered by Nashville police in 2018, as well as a young man and his brother who grew up in America under the DREAM act and two young activists who organize Black Lives Matter protests.

Maren says that the song came to life fairly quickly, as it addresses exactly how she feels in the face of these tumultuous times.

“It’s a protest song — it’s the most American thing to protest and protest songs have been so embedded in American culture,” she reflects, adding that her position as a new mom to son Hayes further informs her decision to work towards positive change.

“I still have hope for this country and for the future of it,” she adds. “…I wanted to promise my son that I’m going to do everything in my power to leave this world better than the one I came into and the one I see right now.”

Maren’s “Better Than We Found It” video ends with the singer sitting on a picnic blanket with her son, whose face never appears on camera. She reads aloud a letter she wrote to him about her determination to help create a better world, saying, “I have to do better. I will do better for you.”