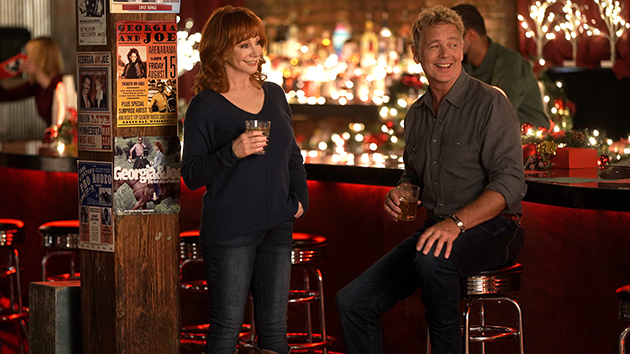 Reba McEntire is a self-professed Christmas movie fan, so it’s only natural that she’s starring in one herself.

The country legend teams up with Dukes of Hazzard star John Schneider in the original Lifetime movie, Reba McEntire’s Christmas In Tune, which sees the two portraying Georgia and Joe Winter, a former husband-and-wife duo who are forced to reunite when their daughter asks them to perform at a Christmas concert.

Turns out, the “Fancy” singer is a Christmas movie fanatic and is excited to launch the holiday season with her own production.

“I love Christmas movies. I watch them all year long if I can find one,” she professes. “John Schneider was so much fun to work with. We’re kicking Christmas off in grand style on Lifetime.”

And while the two stars were walking in a winter wonderland on set, Reba reveals that getting into the holiday spirit took some extra effort, seeing as they filmed in the heat of summer. Despite the blazing temperatures, the superstar singer says the film supplies plenty of holiday cheer.

“We filmed it in June. It was hot, as you can imagine. Even when we were inside, the air conditioning couldn’t keep us cool enough with all of our scarves and sweaters and things like that on, we were sweating up a storm,” she describes. “But it’s a sweet movie, and I hope everybody enjoys it.”

Christmas in Tune premieres on Lifetime on November 26 at 8 p.m. ET.